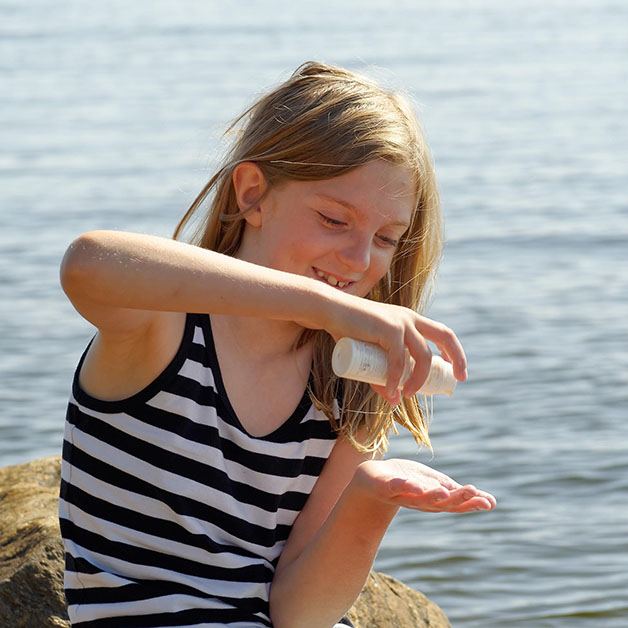 When it comes to sunscreens, it is more difficult to tell which substances are harmful than in a regular moisturizer. First of all, applying thick layers of sunscreen several times a day exposes the skin for much higher doses of the ingredients than a moisturizer. In addition, sunbathing exposes the sunscreen to UV-light, which can cause some of the chemical substances to break down into other more harmful substances, not listed among the ingredients. When we investigated the market to find out what the sunscreens really contain we found that many of the most common sunscreen brands like L'Oréal, Garnier, Neutrogena, Hawaiian Tropic och Lypsyl contained substances that you definitely should avoid in sunscreens, and what is worse, we also found them in sunscreen sprays and lip balms where the risk of inhaling or consuming them is much greater. Unfortunately, not protecting yourself from the sun is a bad option, unless you want to stay in the shadow most of the day. For this reason, we decided to list the most harmful substances that you definitely should avoid when choosing sunscreen.

If this was not enough, ethylhexyl methoxycinnamate is sensitive to sunlight. It breaks down and changes (isomerizes) when exposed to UV radiation [7,8]. Besides the fact that this diminishes the efficacy of the sunscreen, the breakdown of ethylhexyl methoxycinnamate causes the formation of new products whereof at least one is shown to be genotoxic, that is, can harm the cells' DNA [9]. And protecting the DNA is the foremost reason to use sunscreen.

Regarding the hormone-disrupting effect of ethylhexyl methoxycinnamate, a number of studies have found that it perturbs both the estrogen, progesterone, testosterone and thyroid hormone systems [10]. Most studies are done on rats and not humans and there are clearly contradictory results but nonetheless, it is becoming increasingly clear that ethylhexyl methoxycinnamate exerts a multihormonal effect. The mechanisms behind this are yet unclear och the final effect of such a multihormonal disruption is not necessarily the same between rats and humans and depend a lot on at which age you are exposed to the substance. But even though many things are still unclear, enough is clear to say that ethylhexyl methoxycinnamate is a UV-filter that you should completely avoid in your sunscreen products.

Benzophenone-3 / Oxybenzone is another chemical UV-filter that ever since the 1980's been one of the most common UV-filters in sunscreen. Mostly because it, at least partially, also protects against UVA [11]. Benzophenone-3 is a known photo allergen, that can cause allergies in combination with UV-light [11-13]. Benzophenone-3 is taken up by the skin and can be found in both blood and breast milk [11]. There is a clear connection between the levels of benzophenone-3 in urine and the use of sunscreen [14]. New studies point to a connection between benzophenone-3 and decreased levels of thyroid hormones [15,16], which is especially serious during pregnancy. In addition, in laboratory tests, benzophenone-3 has been shown to bind to several reproductive hormone receptors [17,18]. However, the strength of the binding to the estrogen and progesterone receptors are relatively weak in comparison to the binding estrogen and progesterone hormones. So weak in fact that regarding estrogen and progesterone there are in reality not likely any endocrine perturbing effects, which has also been shown in studies on rats. [19]. However, a study from 2016 indicates an alarming connection between the levels of benzophenone-3 in blood and decreased levels of testosterone in teenage boys [19]. All the effects of benzophenone-3 are definitely not yet clarified and it is also unclear how severely benzophenone-3 perturbs the various endocrine systems.

Last year, EU decreased the maximally allowed limit of benzophenone-3 from 10% to 6% and in addition, the labeling of the product should include the warning ”Contains Benzophenone-3” [20]. A big step forward, but preferably should benzophenone-3 be avoided altogether, especially since there are more and more studies indicating that benzophenone-3 also has a negative impact on marine organisms, being genotoxic for corals [21] and diminishing reproduction in fish [22], which is highly disturbing since scientists estimate that several thousand tons of sunscreen reach the coral reefs every year. [21].

Octocrylene is a chemical UVB and UVA-filter that can cause allergies, especially in combination with sunlight [23]. Avoid if you are overly sensitive to sunscreen products.

Formaldehyde releasers are common preservatives in skin care products but can also be found in some sunscreen and after-sun products. Formaldehyde in small amounts decreases the cells' ability to repair the DNA damage caused by the sun's UV-light  [26-28]. Both UVA and UVB cause damage to the skin cells' DNA. Most of the DNA-damage is immediately repaired but, if that is not the case, the cell can transform (mutate) into a cancerous cell. When it comes to products that are supposed to protect against the sun and sun damage, is really bad to include substances that impair the reparation of damaged DNA. This increase the risk to develop skin cancer. In our investigation of the content in various sunscreen products, we found formaldehyde releasers in products from among others Eucerin, Neutrogena, Olay, Hawaiian Tropic, L'Oréal, Banana boat och Coppertone. Formaldehyde releasers should always be avoided but be extra cautious when it comes to sunscreen, after-sun and other products you use when you spend a lot of time in the sun. Read more about formaldehyde och formaldehyde releasers in Hidden Formaldehyde in Skin-Care Products – Increased Risk for Skin Cancer?

When ethoxylated surfactants like the emulsifiers tween-80, polysorbate and polyoxyethylene are exposed to heat or light, they oxidize, breaks down and form, among other things, formaldehyde [29-31], which diminishes the cells' ability to repair the DNA damage caused by the suns' UV-light [26-28]. See formaldehyde releasers above.

Sunscreen in spray form has become increasingly popular and might seem practical. However, with sprays, there is a great risk to inhale dangerous substances and, at the same time, they result in an uneven sun protection. Mainly this risk concerns endocrine disrupting substances and nanoparticles of zinc oxide and titanium dioxide, but to be on the safe side, it is best to avoid spray-on sunscreen altogether.

- by Johanna and Ulrika Forsman

Read more on the blog...